Make me mad. Piss me off. Shout me down. Let it ALL out. Throw a fit. Lose your temper. Insult me. Let me have it. Go on, get shitty. Scream. Take your ball and go home. Vent. Try and stop me. That's right, have a temper tantrum. Bitch me out. Yell at me. Anger me. Anger is power. Anger is motive. Anger is trapped. Or not.

Red, focused anger. Responsive, lashing back. My projects over the last two years have all dealt with mood extremes and the effect of society on the individual. I can give you the reasons and inspirations for both the subject matter and the medium in a five minute blurb, but upon reflection of the work should you consider my circumstances, or your own?

Look within yourself. Take criticism, digest it, swallowing only those pieces making sense in a way important to you personally. Spit the rest out like a bad taste. Personally, if I wanted to work for someone, to follow orders and take directions, this isn't the path I would have chosen. When I become famous I will rewrite this and graciously thank those under whose guidance I became what I am. Until then it's mine to hold or to crush.

Some people inspire with their thoughts and desires. Sometimes they frighten. Most times they bore or anger with their analytical pigeonholing of who we are, where we are placed, what we deserve. More people need to spend more time in thought, carefully considering their actions and the resulting consequences. While it's not my job to judge or dictate others, it is important for me to reflect and compare my own thoughts with differing opinions, and portray my conclusions in my work. Caged, as part of my Interpolations project has been an attempt to portray personality in a postmodern, digital manner. Separated into electrical pulses and impulses, coarse and beautiful. Personalities absorbing, personalities adjusting, personalities rejecting and responding. Human in essence. yet taking into account what programs us, motivates us. Myself - and by extension - us. Where there is one question, one spark of rage, there are thousands. Just Google it, discover your lack of uniqueness. Art is repetition with an occasional new take on the same story. Myself, I try to lose myself in that vision, make it personal. Whatever that really is.

That's my story. What's yours? 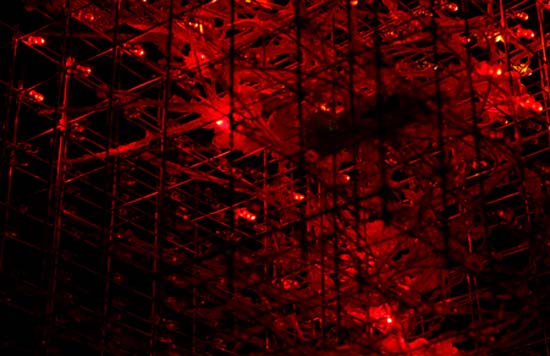 Caged is a wire-framed cube of red lights, well structured, confining. In direct contrast to the highly organized light matrix, the inner depths portray a complex and organic neural system, responding to its environment with ever changing patterns of light. Caged was built from LEDs and interacts with the sound of anger.

To reflect on the anger and cherish it within is the purpose of Caged. The program feeds it regular morsels to keep it alive, focus it′s attention. Occasional thoughts transmitted to the structure flare activity independently of it′s environment. Who among us has not felt anger from the simple memories of an earlier event, changing our attitude or expression enough that those close to us will question if we are alright? Or lain in bed rehashing the weeks events and frustrations? But the real action, or could it be called reaction would be to outside stress. Others, not aware of the situation, who intrude within our anger, our anger taking itself out upon the innocent. The simple sound of conversation causing a flash of irritation. Caged reacts to this directly; but only for a short period of time, calming down, quieting quickly. Direct interruption or interrogation, loud reprimands, direct anger directed to the work prolongs the activity proportionately, even exponentially. Even so, an occasional random break will occur, reseting the emotion, like a stroke of reason or rational thought; a reality check. 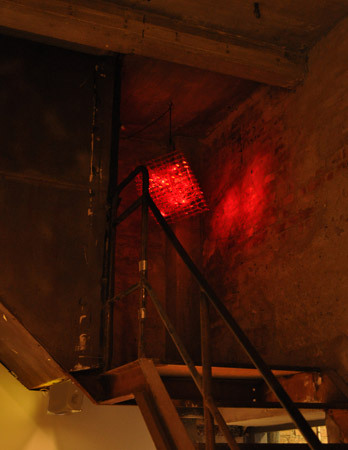